Does anyone Remember a Mrs P Norwood at Dykesmains she was Miss Norwood.

List as much as information as you can please

Here's a picture of Dykesmains Primary just before it opened in 1970, with construction still being completed.

The first pupils were ones displaced from the primary department of Jacks Road school by the process of reorganising education locally; and the first head teacher was the former head of Jacks Road, Mr W.B. Bryson, who continued until he retired in I think 1974. The teachers at that time will also have been mostly ex-Jacks Road primary teachers.

PS Here also is a picture of Mr Bryson at around that time, in 1972: 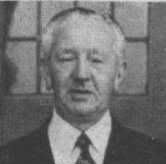 I attended Dykesmains Primary between 1980 and 87. I remember a Mr McCadam (unsure if that is correct spelling) being head teacher for a short period then it was Mrs Cornelius who became head teacher. Mrs Devlin was assistant head and P1 teacher, Mrs Campbell (P2), Mrs Law (P3), Mrs Murray (P4 and always did the piano for assembly and choir), Mrs Hall (P5), Miss Paterson (P6) and Mrs Taylor (P7, who was maried to my old scout leader Bob Taylor). There was also a Mrs Dickson, I think, who changed between P6 and P7 classes depending on class numbers. Mrs Dunbar was school nurse (she also sat on the board for Ayrshire and Arran Acute NHS trust) and I think there was a Mrs Martin who was also the school nurse at some point. Cant remember the janitor that was there but he also worked at Ardrossan Academy. I have to say, I got a shock when I returned to Saltcoats to see the place and found the old Dykesmains I attended was not there but a new building that looked out of place. Suppose I just have many fond memories growing up there.
Top

I've since come across this list , dated October 1970, of teachers who transferred from Jacks Road to Dykesmains :

I doubt if that can be all of them, because I would have thought there would be more classes than that in those days. But I do remember that the pupils moved in two phases; when we were over at Jacks Road in the spring of that year some classes had already moved to Dykesmains, but some of the younger classes were still there in a separate wing, as well the senior class with Mr Bryson. So maybe that explains it.

I think the " Mary Christie " mentioned may well have been the notorious Miss Christie , formerly of Ardossan Academy primary and later of Argyle Primary :

because as old posts here make clear, she was also at Jacks Road for a time :

Hi, I know it's been a long time since this was posted but I have just found this site tonight. I attended Dykesmains P.S. from 1970 till 1977, after Mr Bryson as headmaster I am sure it was Mr Young. Mr Bennett was the janitor, I used to live across from the school so at night it was my playground, Mr Bennett lived not too far away and took his job very seriously so when we were playing in the school he used to turn up and chase us out. We even climbed up on the garage roof then onto to the school roof from there and then "dreep down" onto the ground. Another great playing place was the electric box, we used to play prisoner in there. I remember a Mrs Young, dinner lady. We used to sit at tables and the head of the table would get our food and dish it out for us, keeping the best bits (if you can call it that) for themselves.
Top

l remember the school well I was in the parent teachers association around 1979 my son went to the school.we stayed in simpson driveand his pall stayed at the school gate.they were always playing in the school and getting chased by the jany.
Top

mr.bryson was my mothers maths teacher at Kilmarnock academy. my headmaster at argyle primary. and my sons headmaster at dykesmains.how was that for coincidence.
Top

Mr Bryson. was the 'heed' at the Jack's Road junior Secondary ,that would be in the early sixties. The dreaded Ms.Christie first scared us kids at A.Accie. in the late 50's up until the primary was demolished.I later found she landed at Argyle Road,which was 2 doors from My Parents house I recall on a visit home from Glasgow seeing my younger Cousin Derrek being dragged along the road to school ,on inquiry to my Mum I was advised he had Ms.Christie as his teacher -poor soul!
Recently whilst delving into family tree I found to my horror that Ms.Christie's Father had married a Kennedy -a distant relative in my Seggie line ,that gippy tummy i had whilst at A.A. resurfaced briefly

I only have a vague notion as to where Dykesmains Primary School was but as coincidences go, Nancy Robb, the head teacher, was in my primary class at Jack's Road and before that Argyle Road. We were both in 'Miss' Colquhoun's primary 6 and 7 class. Edith Murchie was 'Miss' Colquhoun's daughter and in 2001 I taught Edith Murchie's granddaughter ( Elaine Murchie) at King's Park Secondary School in Glasgow. Elaine's father, Malcolm was in my wife's primary class. Malcolm and I taught the same subject (Computing) and often met at refresher courses in Glasgow.

I attended Dykesmains in P7 on it's first year of opening in 1970. My class had all come up from Jack's Road PS and Mr Fairley was our P7 teacher, and not one to mess with! It was a fair trek for me living down in Harbour Street. Used to get the big A1 bus at the corner of Union Street across from the Olympic Cafe. Cost me tuppence. As if that wasn't far enough, our first year in secondary was spent at Stanley in Ardrossan due to construction work at the Academy. Wonder if any of my old classmates are on here?
Top

Hi, my name is Kenny McKinlay. Would like to get in touch with anyone who remembers me from Dykemains? I liked Dykesmains more than I liked Ardrossan Academy,hated the academy. Got great memories of that wee primary school though, remember Mrs Bell,Mrs balls,Mrs akenhead,Miss Hogarth,Mrs Carmichael, and also Mr Brison.He was very
strict, I remember when we left Jacks road to go to Dykesmains when it was brand new.
I'm also on Facebook,

I was in the same year as Nancy Robb at Ardrossan Academy until I left in 1970.
Also her friends Leslie McCall , Liz Kinnemonth , Barbara Currie, Barbara Mathieson
Nancy was georgeous!
Top
Post Reply
12 posts • Page 1 of 1

Return to “Schools - The Schools we attended”