Published stories from each town's past.
Post Reply
7799 posts

The presentation was made by Mr H. Hopperton, an honorary patron of the club, at an annual dance held in the Town Hall, last Friday night. Mr Hugh Sim, president, received the cheque and made suitable reply on behalf of the football club.

The dance was a huge success, as have all those run by the Supporters Club. During the evening. a bottle of "Black Label" whisky, donated by Mr Hopperton was auctioned, £4 5s. being realised by the sale.

With Messrs Melvin and Nell as masters of ceremony and Brown's Merrymakers supplying the music, the evening was an unqualified success.

The proceeds of the dance go to swell the kitty from which the £300 was paid, and further functions to this end are contemplated for October and December.


ADDED: Just wondered what that bottle of black label would cost in today's prices?

They All Want it Now!
Ardrossan's 13th century, two ton, stone coffin, which the town council decided two months ago they wanted rid of, is back in the news. Neighbouring Saltcoats wants it and are to ask for it. Moving accordingly at a meeting of Saltcoats Town Council on Monday, Coun. Reid said that when the coffin was first disinterred. Ardrossan did not want it till Saltcoats expressed a desire for it. Ardrossan then discovered that it was valuable and decided to keep it.

"Now that they again want rid of it we should ask them for it for our museum," he added. But, according to Ballie Gourlay, the Barony Church in Ardrossan have already asked that they might have the custody of the coffin and are likely to get it. Treasurer Kerr further complicated matters when he claimed that St Cuthbert's Church, Saltcoats, was the parish church of Ardrossan parish and the coffin should by right, be housed there as it had been discovered in the original parish churchyard on Castlehill.

The Council, however, decided to make the request suggested by Coun. Reid. Should Saltcoats be successful in their approach to Ardrossan, a further snag arises. AT PRESENT THEY DO NOT HAVE A MUSEUM!

Fate of Football Pitch - Residents Object To Noise.
The children's football pitch at Holm Plantation, Ardrossan, may be done away with unless Police-Judge John Lindsay, convener of the Roads and Parks Committee gets his way. At a recent meeting of the latter committee together with the Shores and Improvements Committee of Saltcoats, it was agreed to recommend to the two town councils that the pitch be discontinued. Coun. Johnston, Ardrossan, seconded by Coun. McLachlan, Saltcoats, moved accordingly.

Limestone Nuisance At Harbour
Arising from long-standing complaints of nuisance caused by the handling of limestone cargoes at Ardrossan harbour, the Harbour Company have intimated to the Town Council that they have investigated the possibility of discharging at other berths. This, says the company, is not practicable as the cargoes have to be landed to quay and no alternative space is available.

They have, however, taken the matter up strongly with the receivers of the cargoes in view of the latter's undertaking not to import the fine grades of limestone at Ardrossan. The Council have agreed to wait and see whether improvement is effected.

Died on the way to Infirmary
40-year-old Mrs Annie Trodden or Blackwood, who resided at 19 Busbie Drive, Ardrossan, collapsed on the pavement at Beggs Terrace a few yards from her mother's home last Friday morning. She received head injuries as a result of falling against the kerbing and died in the ambulance which was taking her to Kilmarnock Infirmary.

Annie Blackwood (nee Trodden) was married to James McCracken Blackwood who appears to be from the McCracken side of my Boyce and McCracken great grandparents as mentioned Here I imagine Annie would have been a sister or cousin of the well-kent Jock Trodden of Gospel Hall fame.

Guinness All Round As Stout Boat Takes The Water
To the cheers of the official party on the launching platform and the throng of workmen and sightseers in the dockyard the blue and orange, flag-bedecked hull glided down the slipway into the water. And as the water parted under the vessel's keel there was unfurled from the bow a large poster bearing the familiar slogan, "Guinness is good for you." The motor ship Lady Gwendolen, latest addition to the fleet of Arthur Guinness, Son & Co. (Dublin), Ltd., was launched. 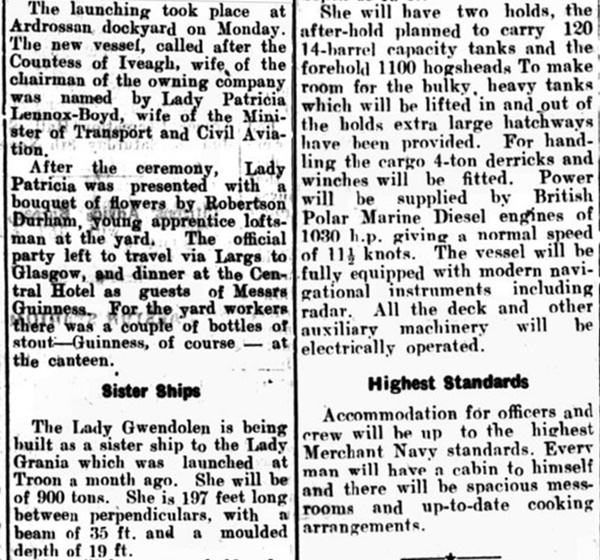 Some nice photos of her in Scottish Built Ships

Community Centre At Stanley Farm - Council to Prepare Plans
At their meeting on Monday night Ardrossan Town Council agreed to a motion by Bailie J. Lindsay that "because of the lack of community facilities in our housing areas" final plans for the layout of the area at Stanley Farm be drawn up. Bailie Lindsay said there were well over a thousand people living in the housing schemes and there was no communal facilities either for meeting places or sports fields.

The area in question, he continued could be laid out very cheaply in the first place for sports and this could be added to later. He thought that some of the farm buildings could later be adapted for use community centre.

The preparation of plans was remitted to the planning committee in conjunction with Bailie Lindsay as convener of roads and parks.
------------------
In the Ardrossan & Saltcoats Herald dated September 5, 1958 "MESSRS Fisher and Sons, Saltcoats, have completed the demolishing of the buildings at Stanley Farm, Ardrossan." More demolition work in the town is mentioned in this Looking Back 50 years ago section of the herald.

Drowning Tragedy At Horse Island
Robert Hunter (43), who resided at 57 Montgomerie Street, Ardrossan, is missing, presumed drowned, as a result of a tragedy which occurred on Wednesday. In the course of his work as a mason with Ardrossan Harbour Co., Ltd., he along with a mate, was re-erecting, a perch on a rack at the southern extremity of Horse Island when they were cut off from the island by the rising tide lashed into a heavy swell by a newly risen wind.

In danger of being swept from the rock by the waves, the two men attempted to swim to the main island and, in the process. Hunter was lost. His mate. James Frew (20), 36 Townhead Street, Stevenston, reached the island, from which he was rescued by the pilot boat from the harbour. He was suffering from shock and abrasions caused by being buffeting on the rocks.

The missing man, who was an ex-footballer, was held in high esteem by all his associates and great sympathy will be extended to his wife and family at this tragic time. Up to the time of going to press no trace of the body had been found.

The S.S. LUCERNE, Captain W G Cross, arrived this morning at 10.15 o'clock. She left Ardrossan on Saturday, the 18th inst., and experienced fair weather for most of the passage. Strong north-west winds prevailed for a day or two. Yesterday a large iceberg was seen about 100 miles from here. The ship has a slight list to starboard.

She brought 1,980 tons of coal for the Coastal Company.

I wonder if there is a connection to Lucerne Cottage on Eglinton Street in Saltcoats which appears to have been built in the mid-1800s, perhaps a link to the Allan line who owned the ship?
Top

Death of Parish Priest
Despite gale-driven showers of snow, sleet and hail, many hundreds attended the Catholic Church of St Peter-in-Chains, Ardrossan, on Wednesday, for the funeral service of the parish priest the Very Rev. Peter Canon Fitzpatrick prior to his interment at Ardrossan Cemetery. Canon Fitzpatrick died suddenly on Sunday night after a short illness.

Canon Fitzpatrick was a native of County Mayo, Ireland. Before being appointed to Ardrossan less than two years ago, Canon Fitzpatrick had been parish priest at Strathaven, Dalry, Kilwinning and Kilbirnie. His first appointment was as a curate at St Joseph's, Tollcross, Glasgow, where he served for 19 years.

From Article - Waterfront At Ardrossan
A piece of information that came my way the other day gave the list of Glasgow owned vessels in Lloyds Register as follows:-

It will be seen from this Hogarth's are practically the second on the list, after the Clan Line. Andrew Weir's can hardly count for they have had their headquarters in London for more than thirty years. All the connection they have with Glasgow is that they register their boats there. They don't even get them built in Scotland now.