Published stories from each town's past.
Post Reply
7799 posts

1st January.
This day seen the opening of the Ardrossan South Beach Railway Station in 1883.
It was opened by the Glasgow & South Western Railway, during the extension of the line to Largs.
As you can see from the picture in the link below, the station now bears absolutely no resemblance
to it's former glory.

1st January 1840.
Dugald Drummond.
Born on this day at Ardrossan, Drummond became a Steam Locomotive Engineer, Designer & Builder.
He was also an 'expert witness' in the Tay Bridge disaster of 1879.
http://en.wikipedia.org/wiki/Dugald_Drummond
Last edited by Richard on Fri Jan 04, 2013 3:55 am, edited 2 times in total.
Top

Ardrossan Town Station closed on 1 January 1968. It lay derelict for years before being refurbished in the programme to electrify the railway. It reopened on 19 January 1987.

It first opened in 1831 as Ardrossan Station and was renamed Ardrossan Town Station on 2 March 1953.

I LOVE the former look of South Beach Station. How elegant.
"Words are very.... unnecessary... they can only do harm".
Top

Here's a closer look at the old station building, Viv. It was still there up till the end of the 1960s.

This is a photo of South Beach Station taken on 2 November 2011. 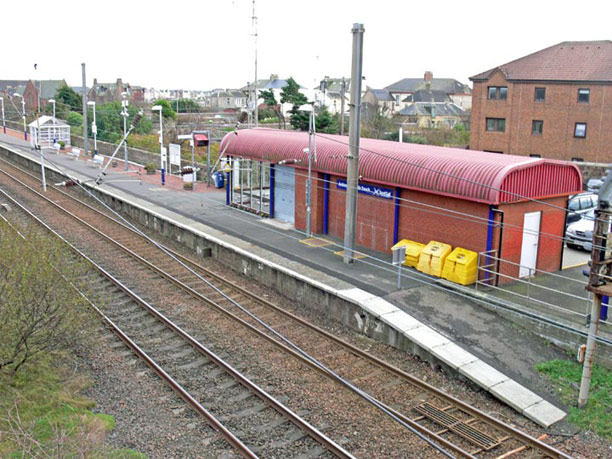 O dear. They cannot make buildings like they used to.
"Words are very.... unnecessary... they can only do harm".
Top

it's called progress. God help us.

"An Ardrossan Dock dispute was settled in the afternoon. A conference of the Harbour directors and the officials of the Dockers’ Union was held in the George Hotel, Kilmarnock, with the result that the Harbour Company made a final offer of an extra farthing per ton on the overtime rate of all coal shipped at the port.

The Harbour Company also undertook to employ all the strikers as vacancies occur."

[I wonder why they elected to resolve an Ardrossan Harbour dispute in a prestigious and expensive hotel in Kilmarnock.]

http://uk.images.search.yahoo.com/image ... W5W4FUPdL4
Nothing is ever really lost to us as long as we remember it.
Top

On 2 January 1825, Arthur Guthrie, founder of the Ardrossan and Saltcoats Herald was born. When he died in 1899, the Herald printed the obituary below.
IN MEMORIAM - MR ARTHUR GUTHRIE
born 2 January 1825, died 25 November 1899 in his seventy-fifth year
We mourn today the loss of our chief. On the morning of Saturday last (25 November 1899), Mr Arthur Guthrie passed away at his residence, Stanley Bank, Saltcoats and on Tuesday (28 November 1899), all that was mortal of him was laid in the grave. There had been no long and trying illness, no weary waiting between action and perfect rest. Till within a week or two ago, he bore the harness which he hardly ever put off throughout his long and busy life and to many the announcement of his death was as unexpected as it was accompanied with profound sorrow and regret. Mr Guthrie was a native of Ayr but as his parents settled in Kilmarnock shortly after his birth, his after associations were with the latter place. There he spent his boyhood; there he received that much of education as was given in these pre-school board days; there he learning his trade as a printer under the guidance of Mr Muir, father of William Muir, one time Collector of Customs at Ardrossan; there he formed friendships which only strengthened with the setting sun of life and there too he had his first quickenings to that career of literary usefulness and public activity which has given him such a prominent place in the intellectual and social life of this shire.
This is the opening paragraph of a longer report in the Ardrossan and Saltcoats Herald of 1 December 1899.

Interesting to discover where he lived : Stanley Bank, which was the house, in the centre of this picture, that used to stand on the banks of the Burn, at the end of Ardrossan Road :

This was the same house which later became the Stanley Hotel ( and afterwards Jack's Place ) and was demolished a few years ago.

3rd January.
SWC Car Valet Services started trading, on this day in 2007, at 32 Montgomerie Street - Ardrossan.
Most 'Threetowners' will remember this location as belonging to Kilmahew House.
Kilmahew House was another, historically, very important local building which was wiped from the
face of the earth and all in the name of "progress" ?
http://www.flickr.com/photos/nayesterdays/4306710472/
http://www.threetowners.net/forum/viewt ... f=2&t=9412
Top
Post Reply
7799 posts