Published stories from each town's past.
Post Reply
6198 posts

Hello.. are there any photos of Provost McKellar?
Top

'GEORGE ARDROSSAN' previously posted a photograph on 1 May 2017. Hopefully it will appear in the following link: -

Births:
McKellar - At 9 Glasgow Street, Ardrossan, on the 6th inst., the wife of George McKellar : a son.

This came up in the list of births on this day - see previous two posts.
The Merry Blacksmith (key D) - on Harmonica ... by Hughie.

School To-day - League Football To-morrow
The envy of his chums is 15-year-old Willie "Stonewall” Jackson, of 15 Kirkhall Drive, Ardrossan. At School up to the end of the term last Friday, he left home on Saturday morning to join the English Football League Club, Bradford, who have had their eye on the youngster for some time. Willie has been playing in schools football and for Ardrossan Y.M.C.A. who at a celebration on Wednesday of last week presented him with a Biro pen and a sum of money. Not of age to sign on as a professional player, Willie will learn the joinery trade while in Bradford.
The Merry Blacksmith (key D) - on Harmonica ... by Hughie. 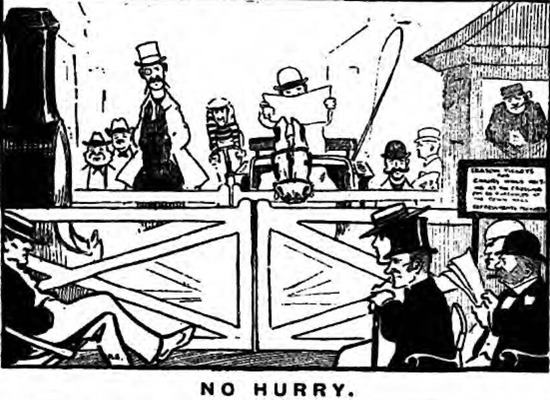 We congratulate the Town Council of Ardrossan in once more resolving to refresh the memory of the Glasgow and South Western Railway Company as to their limitation in connection with level crossings. The complaint against these survivals of a bygone system of passing through a town are not of yesterday. For years the crossing at Princess Street and the Harbour have been sources of annoyance ; and, as was the only natural result from an increasing harbour business, the gates are in more frequent use than ever. It is, of course, easier to complain of the detentions than to suggest remedy.

The Company refer us to the bridge, and say no one need stand at the crossing a moment longer than he cares to. That is very true, but for every one who use the bridge, involving 54 steps, there are twenty who prefer to trust to the train passing through with reasonable speed. The mere passing through would never be objected to. It is the stoppage of a heavy mineral train mid-my, and the shunting and re-shunting which is permitted to take place in the presence of gathering crowds on both sides of the gates. Apart from that there is a fixed limit of time allowed by law: and because no one in authority has directed the attention of the Company to the repeated violations of their power, their inch of privilege has become an ell. The Company require more shunting accommodation that is frankly recognised by those who suffer most from the detention, but even under present condition the suspicion prevails that the Princess Street Crossing more frequently abused than it might be.
The Merry Blacksmith (key D) - on Harmonica ... by Hughie.

The site of the new works is on the Dalry Road, in Ardrossan Burgh, on the north side of the road and above the G. & S. W. line to Largs. Operations are now proceeding briskly, and it's anticipated that the new premises for the company will soon be ready for the machinery. Since the destruction by fire of the company's Glasgow Street premises, the work has been carried on with but little if any delay in temporary quarters, where any machinery saved has been re-fitted. The new premises, which are from plans by Mr Allan Gilfillan, will be of corrugated iron, and will embody the latest in facilities for the carrying on of the work.
The Merry Blacksmith (key D) - on Harmonica ... by Hughie.

The family intimation in the Ardrossan & Saltcoats Herald names the boy as the son of Robert and Lily.

That sounds like it is Bobby’s family.
Will check family tree

Just had a look at Bobby’s family tree, and can confirm this was the firstborn child of Bobby’s grandparents on his Mother’s side.
Top

Meg wrote: ↑
Thu Jul 17, 2014 5:12 pm
Susan, the shop was called The Toll, and was operated by my grandmother's sister Maggie and her husband, Frank Brand. The old shop used to front onto Eglinton Road. From what I remember, he had a Penny Tray!!!! My mum was born in Alpine Terrace, and my two brothers in Vernon Terrace.

My dad Alistair Mackenzie also owned and ran the shop as a general store and lately as an electricians before moving to Princes St.

The meeting on Wednesday morning was at Munnoch Toll, about 3 miles from Dalry. Although the weather was splendid, there was only a small assemblage of spectators. Hares, as usual, were scarce, but the trials obtained were really splendid.

The events contested were – The Ardrossan Castle Stakes, and The Eglinton St. Leger.
Nothing is ever really lost to us as long as we remember it.
Top

At Irvine Small Debt Court on Saturday – Sheriff Campbell presiding – Messrs John and William Young, ship-owners, Troon, sued Messrs Merry & Cuninghame, coalmasters, Stevenston, for the sum of £8 8s 5d, being the amount of a fine on a cargo of ore shipped at Bilbao in respect of non-compliance with the Custom-house stipulations there.

Mr. W. D. McJannet appeared for the pursuers and Mr. W. Christie conducted the case on behalf of the defenders.

It appears that at the port of Bilbao it is necessary in making application to the Customs authorities with regard to a prospective cargo to state the number of tons it is proposed to ship, when a permit is granted for the number of tons mentioned, and that any quantity shipped above what is stated in the permit is held to be an infringement of the law, and a fine is imposed.

In this case the defenders had chartered a vessel belonging to the pursuers for the purpose of bringing a cargo of ore, and a permit had been granted on the representation of the captain for 252 tons. The actual quantity shipped, however, had amounted to 262 tons, and a corresponding fine had accordingly been imposed.

In order to admit of the vessel sailing defender’s agent at Bilbao had paid the fine, but the defender’s had subsequently withheld the amount (the £8 8s 5d in question) from the owners of the vessel in settling the charter of it.

The question in dispute was as to whether the shippers or the proprietors of the vessel were liable for the fine that had been incurred.

After hearing the case at some length, the Sheriff, without taking into account the merits of the question in dispute, held that the consignees, having got delivery of the cargo, were not entitled to withhold any part of the price of it.

He gave decree for the pursuers, but without any prejudice to any future claim brought up by the Messrs Merry & Cuninghame for the recovery of the amount of the fine.
Nothing is ever really lost to us as long as we remember it.
Top

From the steamer THESSALY, which arrived at Havre on the 27th ultimo, news has been transmitted to Ardrossan of the death of a young man named SAMUEL SCOTT, an engineer, employed by Mr. William Young here.

Deceased was one of a squad of engineers and carpenters who left Ardrossan in June last for the Red Sea in order to raise the steamer THESSALY, which had been wrecked there. The work was satisfactorily accomplished, and Scott’s services were retained in order to take the steamer to Havre.

While on the passage, during a storm on the 24th ultimo, the machinery got deranged, and while Scott was engaged assisting in putting it right he was caught in it and so severely injured that he died in two days.

Deceased leaves a widow and child, residing in Ardrossan.
Nothing is ever really lost to us as long as we remember it.
Top

The annual general meeting of this club was held in the Mason’s Lodge on Friday evening. Mr. Thomas Kirkhope presided.

The following office-bearers were then elected: - Patron, the Earl of Eglinton; Patroness, the Countess of Eglinton; and President, Provost Barr.
Nothing is ever really lost to us as long as we remember it.
Top
Post Reply
6198 posts