Hugh Wales
During the Intermediate days there was a lad playing for Kilwinning Rangers named Hugh Wales who was at home either on right half or centre half. He was a power of strength in all games. Senior agents were peeping every week and while they would have liked to approach the player, it couldn't be done on account of the "split." that had taken place between the Intermediates and the Seniors. But his father, a noted judge of players, and a friend of John Hunter of Motherwell knew what was to be the future of his boy.

Then came the surprise; Hugh Wales signed for Motherwell. He went back into the limelight as a senior and gave long faithful service to the Lanarkshire club whose player he still is. When he joined the forces he was not available for Motherwell but when his duties permit he plays in England and he has put up some very fine games. Hugh was always the I finished article and brought credit to Kilwinning and himself. 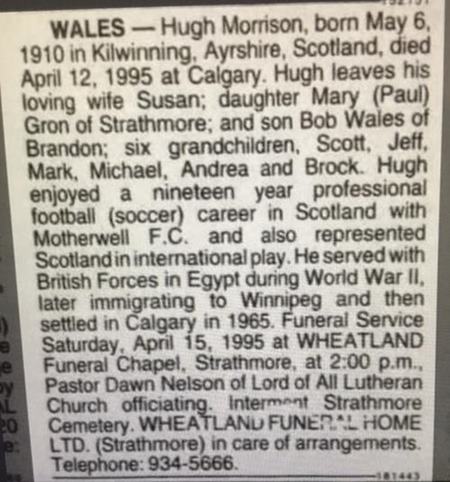 Sam Gracie
As a sports organiser few, if any, in the town of Ardrossan, or many other towns, could claim the experience of Mr Sam Gracie He was in the first Labour Exchange office opened in Ardrossan in 1911. Next he was a member of the boxing and athletic club, games and sports organiser aboard a liner, welfare supervisor at Ardrossan shipyard, dance promoter, football player and official, had tennis courts under his supervision, travelled to America with Ardrossan and Saltcoats Players and has had many other activities connected with sport.

Sam has travelled a bit and is known to a large circle of friends Some years ago would have promoted boxing in the district if a hall suitable for the purpose could have been got. He has crammed quite a lot into his lifetime and the above record proves that he has not been idle regarding sport activities.
The Merry Blacksmith (key D) - on Harmonica ... by Hughie.

Angus Gunn
For close on twenty years Angus Gunn has been interested in the boxing game, and while he didn't rise to the heights himself as a boxer, he could be termed an honest to goodness trier all the time. He fought when called on to do so, and could take a right good hiding, but he could also give one. When he put of the gloves as a boxer, he took up the role as an instructor, and while in this role he has trained and guided many good boys.

Known in the boxing game throughout the West of Scotland, and while secretary of Ardeer Recreation Boxing Section he has organised many good shows, and has taken up the role of referee on several occasions. Has proved an asset to the army when running a boxing show, has the influence in the best clubs to bring boys to Ayrshire who otherwise would not have appeared. He is very keen and takes a keen interest in promising boys. Has proved an asset to the boxing game in Ayrshire.
The Merry Blacksmith (key D) - on Harmonica ... by Hughie.

There was an Angus Gunn in my year at the Academy (1950s) but from the date I guess the Angus Gunn referred to could have been either his father or an uncle. I don't recall my Angus ever talking about boxing but he had the build of a heavyweight.
Top

Willie Farrell
Each town that had a football team had also their favourite footballers, and the passing of time does not blot out the names of these favourites. Stevenston for close on half a century have had their popular players and no one has been more popular than Willie Farrell, who as an inside left for Ardeer Thistle and Stevenston United was the talk of the town. A dark, sturdy made forward who knew every trick of the game, and possessed energy above the average. Whether the ball was in the air or on the ground Willie had the controlling power as he was as cute with the head as he was with the feet.

No player provided more thrills in a game than Farrell, for he always opened out the game at the unexpected moment. And he put a value on every ball, this was more evident when he could, like a flash, send a winger away down the wing with the spectators roaring like mad. and he would be following up at the right place and time to finish the job. Yes, Willie was a player of outstanding ability and rightly claims a place on the records of Stevenston's great players.
The Merry Blacksmith (key D) - on Harmonica ... by Hughie.

John Marshall
Shortly after Saltcoats Victoria was instituted in 1911-12 a well made young man stood by every Saturday waiting to show his ability as a right back; that young man was John Marshall. After serving the Vics. for a time he went to Glasgow. During this time senior clubs were watching him every Saturday and it came as no surprise when St. Mirren fixed-up the big Saltcoats lad. While at Love Street he was being talked of by every Paisley fan, and the papers gave him the headlines. Then English clubs were nibbling, and it was well-known whichever club signed him or got his transfer would have to pay a big price, and still, St Mirren was not too keen to let Jock go. However, Middlesborough were hot on the trail, and all the papers were giving large space to the pending transfer.

Middlesborough got his transfer and the signing of Jock increase their gate drawings for he was certainly an attraction. But his proudest moment was when he led the Scottish team on the field in an international match. He was a powerful kicker, and his heavy build made it almost impossible for an opponent to put him off the ball while he had control of it. After his playing days were over he went to America, where we learn he still resides. As a junior, senior and internationalist he was a successful player.
The Merry Blacksmith (key D) - on Harmonica ... by Hughie.

Kilmarnock Herald and Ayrshire Gazette
May 14, 1943

Alex McMaster
Stevenston can lay claim to many players who have represented their country on the football field, and Alex. McMaster is one of them. As a left-back he was outstanding-not showy, but a real honest to goodness player who always gave of his best.

Ardeer Thistle and Winton Rovers were his clubs, at any rate the clubs that brought him into the limelight. "Conky" as he was best known on the football field, was capped by Junior Scotland, and although he never took up football as a profession, he was certainly class for better company than a Junior club. He took part in many important games and was the type of player who always gave of his best when his team was being hard pressed, for head and feet was brought into action with that skill which singles out a player.

Tough, mighty tough, was Alex., and he possessed the most curious style of play which seemed unusual, and when tack|ling he was a very difficult player to round. But for all that he was most considerate to young players whether with or against him, and that no doubt made "conky" one of the most popular players in Ayrshire during his playing days.
The Merry Blacksmith (key D) - on Harmonica ... by Hughie.

James Nairn
We have in James Nairn, science teacher, Ardrossan Academy, an all-round sportsman, footballer, golfer and tennis player and equally good at each of them. Before coming to Ardrossan, he played with Arbroath, Football Club, who were at that time seniors and of a high standard. But we know him best as a golfer, as he has played with the best amateurs in Scotland and if he had given more time to the game would have been one of the best.

He is a former captain of West Kilbride Club and as a tennis player proved himself to be one of the best. Took a keen interest in the school football team. Was in the 1914-18 war and gained an honour, and at present is one of the leading officers in the Home Guard movement. He is also superintendent of the night school at the Academy. A very popular teacher and his opinion on sport was very just and sincere Just the type of sportsman that is valuable to all sports.
The Merry Blacksmith (key D) - on Harmonica ... by Hughie.

Johnny Johnstone
Stevenston has given birth to many prominent footballers in the past fifty years, and a prominent sportsman is an asset to any town, for by claiming the headlines of the press they advertise the town. No player gave the press more cause to advertise Stevenson than Johnny Johnstone, the former centre-half of Hearts.

Johnny was brought out by the famous old Ardeer Thistle, a team that was tough and never gave in till the final whistle. The Thistle always went out for a good centre half, and when they fixed up the tall young Stevenston lad Johnny Johnstone they were convinced that they had discovered a pocket addition of Alex. Raisbeck. His progress was fast, and Edinburgh Hearts were soon on the job and fixed him up.

While at Tynecastle he was a great favourite, for he was a trier all the time and this made spectators and officials take notice. His quiet manner made him popular, and when the history of Hearts is published, Johnny will certainly take a place of honour. He is now a teacher with the County Council Education Committee, and he devotes a lot of his spare time to church work. He is also a fine golfer.
The Merry Blacksmith (key D) - on Harmonica ... by Hughie.

Johnny was a customer in my father's shop in the Boglemart. He came in for his paper every morning. A lovely man and a real gentleman. JD.
Top

Bob Anderson
Over twenty years ago Saltcoats Vics, signed a young Ardrossan lad named Bobby Anderson and they played him inside right. Then Ardeer signed him, but he never kicked a ba' for the Stevenston club, because Dreghorn had signed Auld, of Stevenston and Ardeer wanted Auld, so Dreghorn agreed if they got Anderson, so both players were transferred. Dreghorn played Bobby at right-half and it was in that position and that club that Anderson came into the limelight. He next signed for Winton Rovers and after playing right half for a time was introduced to right-back when he was spotted and signed by Luton Town. He next signed for Lincoln City and Newport.

His football career as a successful one. Not too big but full of guts, and his lack of inches was made good by his ability and indirmant.(?) Both as a junior and senior he met with success. Born in Ardrossan and served in the last war 1914-1918 was in France at the age of eighteen and when going to England in 1922? he made his home there and still resides there.
The Merry Blacksmith (key D) - on Harmonica ... by Hughie.