Out again this morning. I must be mad!

Looked out the window - Arran looked incredible, with snow on the top. So the visibility was good at least!

Quite a stiff breeze. Got to the top of the road, turned into the wind (to make the trip home easier!) and headed towards Stevenston.
Familiar roads to Kilwinning and then on to Stewarton via Benslie. A few bikes and walkers out, but very quiet. Not really surprising, bearing in mind the cold wind.

20k and just over an hour later I’m in Stewarton. The trip took 10 mins longer than usual, cos of the headwind. Should make the trip home easier (ha!)

Followed the main road to Kilmaurs, then farm road back to Cunninghamhead. Making a great pace with the wind behind me.

I had passed 2 of my usual cafe stops - both closed of course, so no coffee

By this time it had started snowing.
I’m now near Torranyard.


Snow. Freezing cold. Numb fingers. Middle of nowhere. The perfect place for a visit from the puncture fairy!

There’s a caravan park up ahead. Usually give the security guy at the gatehouse a wave when I pass. Of course, it’s deserted today, so no chance of somewhere warm to get sorted - but able to get a bit of shelter to get the tube changed.

Nearly home, fingers numb. GPS says 47k, so a loop round the seafront to make it up to a round number.
Top

Since the latest lockdown I've been trying to stay within "County lines" and not wandering too far from home. So I've been doing the same wee circuit most Sundays this year.
I leave Castlepark and head into Irvine round the Marress Rd past the high flats out to The Gailes hotel, Beach park and Harbourside. Back up the Marress and into Kilwinning. Through the town center and along to Stevenston. Turn down the New Rd up Lundholm Rd, down to the point then the prom into Saltcoats. Back on the road round the Braes, South Beach and into Ardrossan. Turn back along the High Rd back into Kilwinning following the main road back to Irvine. Gets me out for a couple of hours, about 27 miles and never more than 9 miles from hame.
Those wimin were in the nip.
Top

Weather was fine, but breezy at the coast, so I stayed mostly inland. Hadn't planned to go too far, originally intended just to head along to Kilwinning or Irvine then back, but ended up in Kilmarnock!


Saltcoats, along the High Rd to Stevenston, Dubbs Rd to Kilwinning, and on to the Eglinton Park gates. Five Roads, Benslie, then Lawthorn. Some paths and lanes, Perceton Row, then I picked up the cycle path near Dreghorn and followed it to Kilmarnock.

Lots of people out and about, both on the paths in the town and the cycle route from Dreghorn to Killie. All sorts of people on bikes - lots of families and kids with shiny Christmas bikes. teenagers - even saw a couple on a Tandem on Dubbs Rd!
Lots of walkers, and even a horse on the cycle path near Crosshouse.

When I arrived at Kilmarnock - the path ends at Western Rd, and then you're on streets for a bit - I turned back and retraced my route back to near Dreghorn. Through Bourtreehill, into Irvine, along the Main Street and back out towards Kilwinning.

Back to Stevenston via Dubbs Rd. Turned left down the ICI road, and went round the "bottom end". Into Saltcoats past Auchenharvie, then round the front as far as the Lauriestion. Lots of people on the prom - which is also the cycle route - I stayed on the road.

Turned up at the Lauriston past South Beach station, up to the High Rd at Ardrossan Academy, and then home.
Top

Last Sunday morning I went from Irvine to Ayr. On the road all the way. 37 miles.

Monday and Wednesday after work I headed round the beach park/harbourside and into kilwinning. Turned up to Whitehirstpark and over the country road to the top end of Stevenston. Back down Campbell Avenue/Macgregor Avenue and onto Glencairn st. Along the High road through Ardrossan and turned back at North Crescent road. South beach, the Braes, the prom and down the bottom end of Stevenston before going up the new road cut along Dubbs rd and back to castlepark. 25 miles each.

This morning I went back to Ayr (same way) but continued on around Alloway and back to Irvine. From there I went to Stevenston via the Dubbs rd then back to kilwinning where I popped into the academy and got my first covid jab. From there back hame to Castlepark.
51 miles today.
Those wimin were in the nip.
Top

I had a trip to Portencross and Largs last weekend.

Yesterday, decided to go the other direction.

Looked a reasonable day outside. Bright and dry, but cloudy. And since it's officially sort-of-spring, I don't need to wear the Big Gloves anymore!
However, couldn't find the ordinary gloves, so reluctantly put the Big Gloves on.
Just as well - it was freezin'!

Along the high road through Saltcoats & Stevenston, then picked up a section of the National Cycle Network (NCN73) at Dubbs Rd in Stevenston. That’s the route which goes from Kilmarnock to Ardrossan, and then continues over in Arran and Kintyre. It's a farm road - used to be a busy "rat run", but the council installed bollards half way a few years ago, so no through traffic for cars. A few years ago, I'd have been avoiding cars and white vans, but yesterday it was all bikes, walkers, 2 horses and one ned on a moped...

Reached Kilwinning, onto a cyclepath, and the council had been at work again. Normally those paths are pretty overgrown, with a "rideable" section in the middle that is sometimes less than 3 feet wide. A pain when you have to pass someone coming the other way. But they've pruned back the bushes, and scraped the grass back to the kerbs - so the path is a clear 8 feet, at least. Normally, after a few hundred yards, I'd leave the narrow path and go onto the road, but I stayed on the path (which by this point has morphed into NCN7) for a few miles. NCN7 around here runs from Ayr to Glasgow, via Irvine, Kilwinning and Johnstone, but end-to-end it runs from Sunderland to Inverness!

Into Irvine, round the harbour, and on towards Troon. Again, I'd normally use the road, but the path had been cleared there too! That's a big

to North Ayrshire Council - for 2 things!

Followed NCN7 around Troon, turned at Prestwick Airport, back into Troon, quick coffee, then home by a similar route, but sticking to the roads. 54k 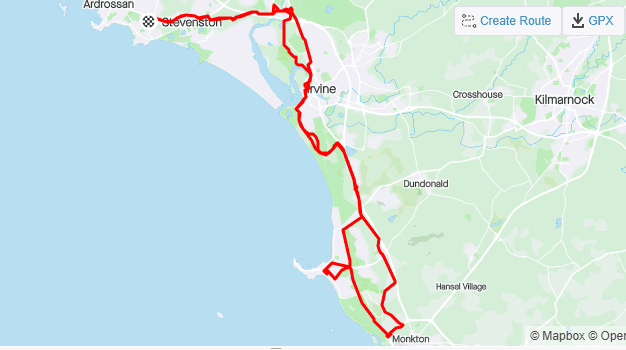 All local roads today - don’t think I was more than 6 miles from home as the crow flies.

From Saltcoats, though Stevenston then Dubbs Rd to Kilwinning. Fiveroads and out towards Benslie, but turned left before Benslie to follow some farm roads. Crossed the Glasgow-Kilwinning road, then headed sort of towards Dalry.
Past the Blair Mill, turned back towards Kilwinning, and through the town.
Pennyburn and Whitehurst Park.
Towards Dalgarven, some hilly roads took me to the Saltcoats-Dalry road.
More farm roads, to the Munnoch dam, half way between Dalry and West Kilbride, then back to Ardrossan and home. 51k.
Top

I've been staying local most of the time but woke up this morning and decided to go a bit farther a field.

What a cracking morning it was. I had it in my heid to head to Dunure so I pointed myself in the direction of Ayr. Left just before 7 so very quiet and i stayed on the road all the way to Ayr. Cut down to the beach at the pavilion and on to the wee farm road that brings you back onto the Dunure road.

Out by Butlins and the farm park but when I got to the turning for Dunure I decided to go straight on and go to Culzean Castle. It's been a long time since I've went that way and I forgot how hilly it is. I kept telling myself it'll be worth it on the way hame. Electric brae next then round to the castle were I stopped for a drink and a mars bar and sat for 10 minutes before heading back to Irvine.

Fantastic run back to Ayr and as it was more downhill I could pay more attention to the scenery. It really is a beautiful part of Ayrshire. Main road all the way except when I cut through the golf courses from the airport to Barassie. Then along the Gailes rd to Irvine and hame.
60 miles on a brilliant April morning.
Those wimin were in the nip.
Top

60 miles is nobody's business bonzo. Well done for that. Its always great to read you and bruce cycling adventures tinged with a degree of homesickness

brian f wrote: ↑
Sat Apr 03, 2021 7:59 pm
60 miles is nobody's business bonzo. Well done for that. Its always great to read you and bruce cycling adventures tinged with a degree of homesickness

Thanks Brian, means a lot that you're aw reading it

Those wimin were in the nip.
Top

Shoosh Meg, I know, I try to tell myself I'm on my own. I know it's not an excuse but I see cycling clubs out 10,20 plus. I can see the paper mill fae culzean I consider that local

Those wimin were in the nip.
Top

Shoosh Meg, I know, I try to tell myself I'm on my own. I know it's not an excuse but I see cycling clubs out 10,20 plus. I can see the paper mill fae culzean I consider that local

I’ve noticed the cycling clubs regularly tearing through Ayr - as long as you can still see your local authority, I think you’re ok

. Can’t wait for the next 3 weeks to be over and am able to get up the coast again. My pal lives in Saltcoats and I haven’t seen her for 8 months.
Top
Post Reply
924 posts