Discuss all aspects of the three towns in the Threetowners' Lounge.
Forum rules
Please familiarise yourself with our Board Rules and Guidelines
Post Reply
16 posts

Intimations from the Ardrossan & Saltcoats Herald of 3 July 2019,

The family of Moira are sad to announce her passing in June. Moira was born in Saltcoats to Angus and Agnes Lauchlan in 1943. Moira trained as a nurse at Ruchill Hospital Glasgow before joining the Queen Alexandra Nursing Corp, which took her around the world. Moira finally settled in Australia with her four girls in the early 70's, living in N.S.W and Victoria, her later years were spent living in what she called her 'Paradise of Noosa' with her daughter, Naomi, son in law, Adrian and granddaughter Mia.

Moira lived life to the full, always entertaining people with her stories of Saltcoats and travels around the world. Now she is at peace with her most beloved husband Roger.

Moira loved looking at the Threetowners and will be laughing that she has 'got a wee mention on Threetowners'. 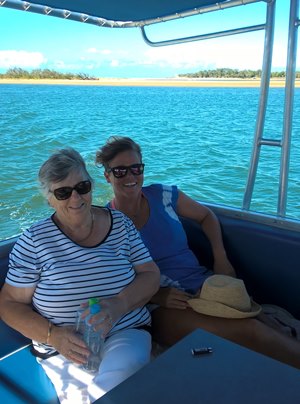 The Merry Blacksmith - on Harmonica ... by Hughie.

Condolences to her family Hughie - what a wonderful and full life she lived.

We and many others from NSW and Victoria often visit Noosa during our southern winter. Parking is at a premium there, so lately we've been catching the Bus from Maroochydore on day outings - remember, Netta? - Nice place to retire to.

The Merry Blacksmith - on Harmonica ... by Hughie.

I’ve just received this message from Ian, our very own Manbear. I’ve used his words...


Meg I don’t know where to post thanks to members who posted thinking of you e.t.c at the posting of my wife’s illness this is just to say thank you all Irene passed away at 0100hrs on the 9th at home with us all beside her after a very long fight with Alzheimer’s that lasted 14 years and in the last year suffered 2 bouts of sepsis and further complications from her illness and every time proved the hospital and doctors wrong about when she would pass she went when she thought it was right.

Manbear,
My sincere condolences to you at this time. Know you are in my thoughts.
Margb
Top

Thinking of you at this sad time, Ian.

Can i offer my sincere condolences. Irene was very brave and a true fighter, she will be at peace now and not suffering.

Brian.
“once you stop learning you start dying”
Top

No more pain and confusion Ian, but still hard to take. Our thoughts and prayers are with you at this sad time.
Top

So sorry for your loss. Please except my sincere condolences to you and your family.

Ian.
Those wimin were in the nip.
Top

Sorry to hear the passing of your wife, Ian. The suffering has gone and she's now at peace. Condolences to you and your family.

Sincere condolences to you and your family, Ian. Take some time for yourself for a little while now.
Top
Post Reply
16 posts