To farewell Autumn and with us still feeling the cold in the South of this great land of Oz, I've decided to make pea and ham soup tomorrow. No objections from the lady of the house. Got all the ingredients and if it works out I'll share.

Hahaha, after I read hughies post I went straight onto YouTube to find this advert.
Those wimin were in the nip.
Top

Turned out beautiful. Wife loved it and there is some left for tomorrow. Second day of this soup was so lovely, even better than the day before.

Cooler weather approaching down under, so it's Pea and Ham soup for us this weekend. Again, following that recipe above made with a real hock.

We are on the same page Hughie just bought a ham hock this weekend my favourite is lentil..
Top

Ham and Lentil ,Scotch Broth my favs.
https://www.bbc.com/food/recipes/scotchbroth_8116
SC
“He that has no fools, knaves, nor beggars in his family, was begot by a flash of lightning.” Thomas Fuller
Top

Had a go at this a week or so ago using your above recipe Hughie, the only difference being I made it in my slow cooker, so the method and actual cooking time's were just a bit different.
Still blended about a third of the mixture in a processor though before returning it to the mix.

Got all the ingredients in Lidle's, Stevenston, for round about a fiver. I used yellow split peas for it as that's all they had at the time, but as far as I'm aware there's virtually no difference between them and the green one's anyway.

When I took the Ham Shank out then cut the skin and any excess fat away I only used about half of the meat for the actual soup, which left some over to refrigerate and use for ham sandwiches etc.

Wee bit on the thick side but that's how I like Pea and Ham/Lentil/ Scotch Broth etc. Still got about 6 tasty bowlful's from it though and here's one I prepared earlier ... after I'd half eaten it.

I'm a bit raw when it comes to homemade soup making, but it's good to have a go and with a wee bit of practise and fine tuning this recipe should do me just fine. 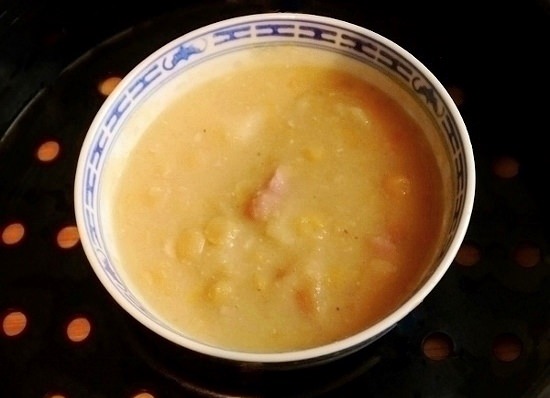 Looks good, Michael. As you say there is a fair bit of fat waste from the shank - but that's what adds the flavour to the soup. I also found there was little need to add all the lean meat back to the soup - so just like you I put the remainder back in the fridge for a ham sandwich later.

That's very true re fat and flavour, Hughie.
I like to see plenty of meat on ham shank's, but I try to steer clear of the one's with next to no fat on them.

My Mammy used to swear by making certain soup's with what's known here as 'Boiling Beef' - which as you'll probably know, is basically just a piece of flank on the bone from the animals rib's.
It's always been a fairly cheap cut to buy, but the fat content of it made it ideal for soup's etc.

Beef Flank is also used in the making of quality Scotch Pies these days and without it they just wouldn't taste the same.