Not the THREETOWNS but close

Our "Off Topic" forum - have a wee blether here.
Forum rules
Please familiarise yourself with our Board Rules and Guidelines
Post Reply
407 posts

On Saturday evening a telegram from South Africa was received at Eglinton Castle stating that Lieutenant the Hon. William Montgomerie, of the Scots Greys, second son of the Earl of Eglinton and Winton, had been seriously injured by the breaking of a foil in a fencing match, the blade having entered his abdomen.

An operation, it was added, had been performed, and the patient was lying in a critical condition.

This was followed by a second wire, which reached Eglinton about four o’clock yesterday afternoon, announcing the death of the Hon. William.

The late lieutenant, who had gone through the South African war with his regiment, was a keen athlete and was a general favourite with all whom he came in contact. When staying at the castle, he played regularly with his father’s cricket eleven, and his figure and name were familiar to all who followed the game.

The Earl left last night for London.
Nothing is ever really lost to us as long as we remember it.
Top

Bobby Locke.
What a golfer he was: Won "The Open" four times. And so much more: https://en.wikipedia.org/wiki/Bobby_Locke 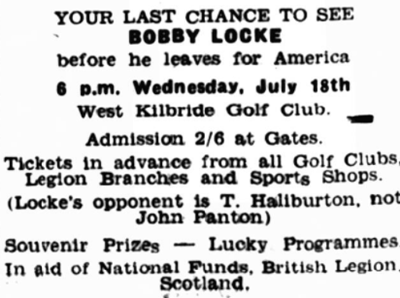 Segdoune Queen - Successful Ceremony and Celebrations
In complete contrast to last years torrential rain, the sun blazed in a clear, blue sky for the crowning of the Segdoune Queen celebrations in Kilwinning last Saturday. And the sun brought out the crowds whose summer attire added to the colourful scene at the school playground where the crowning ceremony took place.

Chosen by the popular vote of her fellow pupils at the Higher Grade School 14-year-old Betty Finlayson was radiantly lovely and carried herself with perfect poise as she mounted the rostrum with her attendants for the coronation. Mrs Fleming, wife of Provost Hamilton Fleming performed the crowning ceremony in gracious manner while the attendants played their respective parts with confident sincerity.

Followed the reading of the Queen's proclamation by the Herald (John Bannerman) -
My faithful lieges, the towns folk of the ancient Burgh of Kilwinning. I offer you my most sincere gratitude for such a moving and heart-stirring expression of loyalty as you have shown on this my coronation day.

"It is with pleasure that I have observe your growing and just concern for the traditions of our historical town, the town of St. Winning and the wooden Christian Cross, De Morville and the Abbey of the now almost forgotten craftsmen, the hewers of stone and the wearers of harnish shawls.
".... Given this day at our Court and signed by Queen Betty
"God save the Queen."

(This paragraph relates to the Image below.)
"... to you who have spent many years within sight of our noble ruin..." (Above) The Herald reads the Queen's proclamation with the newly crowned queen and her retinue in the background.
(Right) Radiant Queen Betty smiles happily on the crowd before leaving to place
wreath on the war memorial.

Provost Fleming, Bailie Thomas (convener of the responsible committee) and Provost
Gourlay, of Saltcoats were presented to the Queen, after which amid the cheers of the crowd, the Queen and her retinue left the dias to proceed to the cemetery where the Queen placed a wreath on the war memorial'

The Queen's attendants were Nan Howie, Sadie Bradford, Margaret Kerr, Betty Murray, Maureen Lundie and Violet Reynolds. The guard of honour was of Girl Guides and the Sea Scouts provided the trumpeters. Following the crowning ceremony there was a real gala programme of sports, Highland dances and other entertainments.
Footnote - Her personal charm apart, there is little doubt that Queen Betty's popularity is to great extent attributable to the fact that she is girls sports champion of her school. 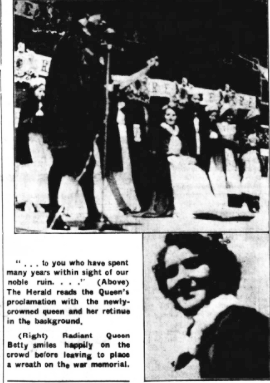 On Wednesday evening, a hawker named - Mrs KENNEDY, belonging to Saltcoats, fell into the water while in the act of stepping into the ROTHESAY CASTLE, which was lying at the pier landing her evening passengers from Ardrossan.

The cook of the steamer, with a line tied round his waist jumped into the sea and caught the woman, and both were taken aboard a boat which the steamer lowered.

Doctors Kelly and Rankin, of Greenock and Kilmarnock respectively, were at hand, who, after applying respiration succeeded in restoring breathing.

Mrs Kennedy, the hawker, who narrowly escaped drowning at Brodick Pier on Wednesday evening, was brought to Saltcoats on Friday.

After her arrival, however, she gradually sank, and died that same afternoon from the effects of the accident.
Nothing is ever really lost to us as long as we remember it.
Top

On the night of Sunday last, a person was observed on a tree in the garden of Mr William Lang, farmer, Hartgrove, near Kilbirnie, stealing some fruit.

The same garden having been of late frequently the subject of depredations of the same character, a person had been stationed with a gun to watch it; and as soon as the individual perceived the man on the tree, he immediately fired at him.

Though the latter was, as was afterwards ascertained, severely wounded about the legs, he maintained his position on the tree, and the person watching left the garden.

Two other men, who had been also in the garden with the person shot, immediately conveyed him to Kilbirnie, where he now lies in a precarious condition.

On the same evening, two men having been stationed to watch a field of beans, some distance from Kilbirnie, observed an individual enter the field, but as soon as he saw the two men watching, he made the best of his way out again.

One of the watchers instantly pursued, and threatened, if he did not stop, he would shoot him. The person did not stop, but no sooner had the person watching got within gun-shot than he fired, and the contents of the gun took effect in the back part of his head, his arm, and his leg.

He was conveyed to Dalry, where he now lies severely but not fatally wounded.
Nothing is ever really lost to us as long as we remember it.
Top

Lately, on her passage from India, Jane, eldest daughter of James Burns, Esquire, youngest son of the Ayrshire poet.
Nothing is ever really lost to us as long as we remember it.
Top

Anybody remember this gentleman?

I never met him but he had a formidable reputation, and was criminally active in Ayrshire in the 1960s.
Nothing is ever really lost to us as long as we remember it.
Top

He had quite a life PT - dying in Perth Prison serving a sentence after being arrested on a rooftop in Ayr. His Wikipedia entry is worth a three minute read.

Let Ramensky go. This is actually a nice song.

I find it interesting that amongst the items Ramensky protected in a Glasgow Bank vault included his Commando beret, it brought the following topic to mind: -

https://www.threetowners.net/forum/view ... ilit=beret
Nothing is ever really lost to us as long as we remember it.
Top
Post Reply
407 posts