For those researching family in the three towns area.
Post Reply
12 posts • Page 1 of 1

Hi, My Grandfather from Stevenston was caretaker/keeper of Billiard Hall c 1930.Where would they have been.I only know of the ones in Canal St.and not sure if that was Billiards or Pool,Snooker.He was living in Boglemart St.

Hi, Bonaldi's had the billiard hall in Windmill St.It was where the Flask pub is now.When I was young it was an old man called Matt Harper that was the caretaker.One of our forum members had a relative that had a hall in Canal St I think Meg Gordon will know more about that. Sam.
Top

Hi, No,it was old Matt Harper up untill about 1962-3.After that it was big Ian Jackson and Deeds Burns for a wee while .Then they turned it into the Castlewirock pub.I did know a Matt Scott he used to work in wee Matt Taylors betting shop,he used to walk greyhounds too,would that be the same man,His wifes name was Ada. Sam.
Top

Sam,Matt Scot your thinking on was married to Ada Bell,Hamish's Sister.
Top

me being a youngster??I mind the old billiard hall in back lane (kilmahew street) I used to peek through keyhole at men playing on way to deep sea restaurant on a Saturday night for my parents?
Top

I recall around 1955 going to the one in Factory Place - see 1938 image. I also played in the one in Canal Street which later became Kelly's betting shop? Perhaps it's now a car repair place.

This from a Kilmarnock newspaper in 1946. As you can see billiard halls were very popular back then. I suppose Darts and perhaps dominoes in pubs have for the most part taken their place. I remember playing in three halls in Saltcoats, one in Ardrossan and in Stevenston at the Rec in the fifties. I've never heard of Donald's rooms in Saltcoats as mentioned in this article. Anyone know where this was? 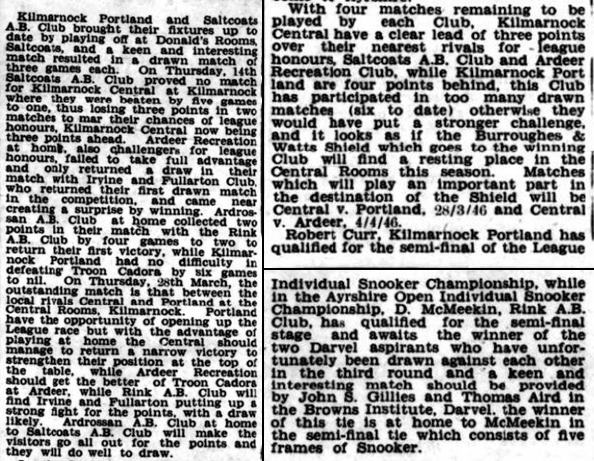 Hughie, would that be part of or prior to the Castlewirock. Donalds owned but dont know dates or anything. Only a thought
Top

hughie,I never heard it called Donalds rooms,but as far as I know Dan Bonaldi changed his name to Donald during the war,so its likely its the hall in Windmill St they mean.
Top

Thanks, Sam. That would be a perfect explanation for it being called Donalds at that time. We had a wee reunion back in that very place around 2007 when it was named and probably still is named the Flask. Our dear member, Morag, who we lost recently (RIP) confirms what you say in this much earlier post. Great to have your input, Sam.

Margaret, up in Queensland's peanut country, kudos to you too for your on-going support for threetowners forum - it was nice to put a face to the name a few years ago - maybe next year too.