Saltcoats - On This Day In History

Published stories from each town's past.
Post Reply
3025 posts

Hi, Meekan:
The post, for me, was actually an ideal opportunity to show off another of the 3Ts fine historical buildings
before someone, in their wisdom, decides that a block of flats, a supermarket or parcel delivery storage
facility etc would look better in that location.
I might not be religious but it's a firm belief of mine that churches are a very important part of our history
and who we are. Also, that old buildings, such as churches & schools etc, should be preserved at all costs.
One of the puzzling aspects of my post, for me, was why do these meetings take place in Saltcoats and not
Ardrossan ? Future generations reading this may wonder the same ?
Your contribution makes the situation more interesting as we are now hearing from someone who is actually
involved and someone who is helping to create tomorrow's history stories. Maybe you could explain, for those
of us not in the know, why it was significant for this to be put into print or was it just a standard notification
of church business ? I also think it would be educational if you could explain why these meetings of the
Ardrossan Presbytery took/take place in Saltcoats, and not Ardrossan ? I understand that the details could
probably fill a book of their own but a brief attempt would be very much appreciated.
It would add to the historical importance & relevance of these buildings in our communities, not to mention
give a better understanding, to future generations, of the 3Ts people and those who frequented these buildings.
It all helps paint a clearer historical picture of life in the three towns.
Top

Hi Richard,
The New Trinity church building which currently is the meeting place of Ardrossan Presbytery, was due to cease to function as a church with the congregation joining with that of St. Cuthberts. There was problems with this proposed union in that the people from New Trinity wanted to continue in their own building which was not part of the presbytery plan. While the appeal was being considered the building at Barony St. Johns (the church in the 3 towners banner) became unsafe and the congregation there began sharing the building which belongs to the congregation of the English Church at the Galloway burn. I believe the new proposal is that the Barony St Johns and the New Trinity congregations are to form a union and worship in the New Trinity Building, So that building will be saved. The Barony St Johns building will probably be demolished due the cost to make it safe especially if the union goes through.
I'll try and give a brief explanation regarding your questions, starting by saying that the Church of Scotland has divided Scotland into presbyteries and the presbyteries into parishes with individual churches being responsible for people within their parish boundaries. So in theory where ever you are in Scotland you are in someones parish and are their responsibility.
That having been said brings us to Ardrossan presbytery, which stretches from Largs to Kilwinning taking in Dalry, Beith and Kilbirnie, Arran and the Cumbries and all stops in between. Representatives from parishes within this area meet at least once a month in a central point which happens to be in Saltcoats. (people from the islands having an overnight stay)
These meetings are open to the public and the minutes are freely available on the presbytery website. As for me I have retired from being a presbytery elder and am happy quite frankly to be out of it.
Incidentally the New Trinity building is within a stones throw from the old "Ardrossan parish church" now the Heritage centre. Remember also that in days gone by there was Stevenston parish and Ardrossan parish but no Saltcoats parish, the boundary between the two run through the middle of Saltcoats.
The New Trinity building itself occupies the site of the chapel after which Chapelwell Street is named, the chapel having boasted of a well which was one of the coolest and sweetest in Ayrshire.(Timothy Pont)

You've been far from boring, meekan.
That's the kind of response I was hoping for. Paints a brief but informative picture, which even I understood.
I really don't like the prospect of losing the Iconic Barony St.Johns. If ever a building was symbolic of Ardrossan
it is that one. It's impossible to imagine seafront pictures of Ardrossan without that building.
Anyway, thank's for taking the time.

Church history is a big part of the 3T history- no matter what faith you are and for explanations like the one you gave about New Trinity is so helpful because it stops confusion arising especially when up to 4 churches are involved. Thank you meekan. margb
Top

The ornamental gardens at the town end of Ardrossan Road were declared open on this day in 1962, replacing old cottages; and in days when it was a much rarer feat than today, the naming was made an occasion to honour Mrs Annie Ness, who had recently celebrated her hundredth birthday.

" Centenarian Mrs Annie Ness from Saltcoats spent a quier afternoon at home last Saurday while new municipal gardens, named in her honour, were officially opened by one of her daughters, Miss J Ness. " Mother is wondering what all the fuss is about, " remarked Miss Ness after declaring the gardens open. "

Saltcoats Town Council have received intimation of a grant from the Unemployed Grants Committee for a scheme for the completion of the East Shore Esplanade including the erection of lavatories and shelters. The estimated cost is Three thousand-four hundred - and ninty-seven pounds.

It is a condition of the grant that work is actively commenced by April 1930, and that as far as practicable only married men or men with dependants be employed on the work.

The scheme it is estimated will provide employment for about 50 men for six or seven months.
Last edited by Penny Tray on Wed Nov 15, 2017 9:47 pm, edited 1 time in total.
Nothing is ever really lost to us as long as we remember it.
Top 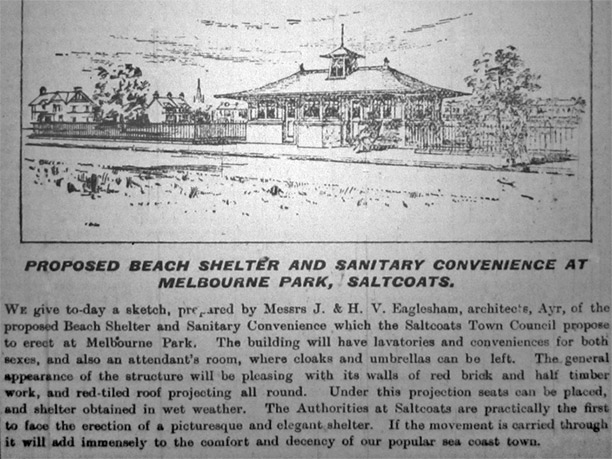 "The death has occurred at her home in Saltcoats of Mrs. Clara Isherwood, Saltcoats´first woman councillor and magistrate.

She served on the Council from 1923 to 1931."
Nothing is ever really lost to us as long as we remember it.
Top

On this Sunday, as reported in the following week's A&S Herald, the replacement for the Iron Bridge at Ardrossan Road was put into place.

I recall clambering up all these stairs to attend the Baptist Church-could be quite dangerous on wet/icy days.
Top

A grandfather clock made in Saltcoats between 1830 and 1840 is to be auctioned in the Normandy Hotel, Renfrew, in aid of the King George Fund for Sailors.

The clock has been donated by Antique Supermarket, Bath Street, Glasgow, and will be auctioned during a lecture by Mr. Arthur Negus who appears in the BBC television programme ´Going for a song´.

The clock, which has a mahogany case with satinwood inlay was built by John Gibson of Saltcoats and should fetch more than one hundred pounds.
Nothing is ever really lost to us as long as we remember it.
Top

SAINT PATRICK'S DAY AT SALTCOATS
On Friday last (15 March 1895), Saint Patrick's Day was celebrated by a concert in the League Hall, Wellpark Road, Saltcoats, the Reverend Philip McColl, presiding. There was a large attendance. The members of Saint Bridget's Select Choir rendered a splendid selection of pieces. Amongst their best efforts were The Wearing of the Green, Flowers of the Forest and Willie Wastle. Several of the members contributed excellent solos. Mr James M Power efficiently conducted and Mr F Kellett played the accompaniments. During the interval, the chairman made an appropriate reference to Saint Patrick in whose honour they had met and afterwards made a vote of thanks to the choir which was heartily responded to.
Ardrossan and Saltcoats Herald, 22 March 1895