For those researching family in the three towns area.
Post Reply
6 posts • Page 1 of 1

Mr Hugh McCallum has generously invited me to post this request.... 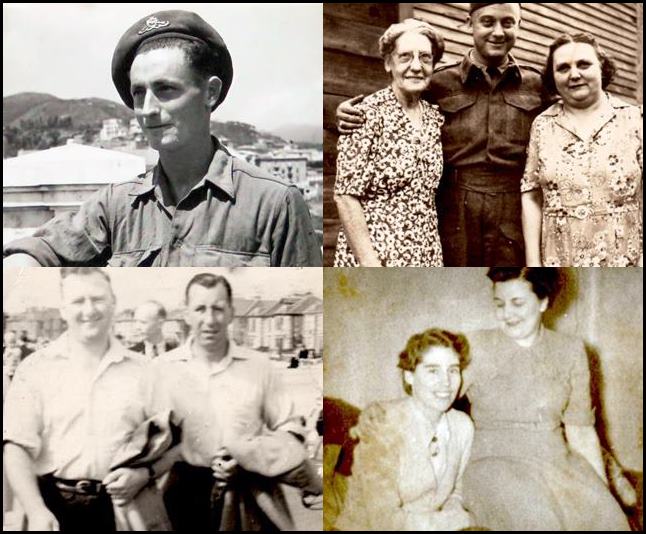 Did you know James Mortlock? Can you identify anyone is the attached pictures?
I am researching my family tree and have found several photographs of interest.
The photographs above relate to my late Uncle James Mortlock, his service pals and acquaintances.
James was born in Beckenham, Kent. He lived most of his adult life in Portsmouth, Hampshire where he worked as a Guard for Southern Railway
During WW2 he was a "Gunner" in Royal Artillery, 213 Anti-Aircraft Battery which served in UK, Cape Town, Egypt and Italy.
I believe that he shipped out of Greenock in 1941 for Cape Town and may have been billeted in or about "Threetowns".
I know that he regularly visited Saltcoats after the war and may have done so to reunite with friends he made in the area in the 1940's
If you recognise the name James Mortlock or anyone in the photographs attached I would love to hear from you.

Many Thanks RCM
Top

Firstly, the photograph of the two men together looks as if it might have been taken on the promenade opposite Montgomerie Crescent, Saltcoats.

Secondly, 'MORTLOCK' is not a common name locally and in 150 years or so of family intimations in the Ardrossan & Saltcoats Herald it is only mentioned three times.

1. In the edition of 20/12/1946, intimating the marriage of ROBERT MURRRAY MORTLOCK to RACHEL PRISCILLA LYONS of Stevenston - in St. Andrew's Episcopal Church, Ardrossan.

[There is no mention of where Robert Murray Mortlock hails from, perhaps implying that he wasn't local??]

2. In the edition of 2/9/1949, by an acknowledgement which mentions W. H. MORTLOCK, Hayocks Road, Stevenston.

3. In the edition of 27/9/1963, by an acknowledgement which mentions FREDERICK ARTHUR MORTLOCK.

Any of these names mean anything to you?
Nothing is ever really lost to us as long as we remember it.
Top

Hi RCM,
I found a marriage record on Scotlands People that might help.
James William Mortlock and Annie Malcolm McIntosh married in 1944 in the parish of Gourock. Annie was born in 1920 in the parish of Greenock West. She may have had relatives in Saltcoats.
This could be a coincidence, though.
It is never too late to be what you might have been.
George Eliot
Top

Thanks for your replies.
The surname Mortlock is a derivation of the name Mortlake that originates from that village in Surrey. Others are: Martock, Morlack, Mortlach.
I believe there is or was a whiskey distillery in Scotland named Mortloch...
It appears that most Mortlocks originate from the same ancestors who lived in and around Cambridgeshire/Essex/Suffolk.
I have not traced any Scottish connections, yet. The names you have suggested will be of interest. Thank you for taking the trouble to investigate.
I am not local and placing this submission was a long shot in researching Uncle Jim's life. He died in the early 1970's, a bachelor.
Locals may have recognised their older relatives/neighbours etc in the pictures. I have others but have difficulties in uploading to the forum.
It may be of course that Uncle Jim just liked holidaying in Saltcoats (and why not!), but my feeling is that he had great affection for the place and/or people there, whomever they were.
Kind Rgds, RCM
Top

Just a thought. Jim was an Ack-Ack gunner.
There were two Ack-Ack emplacements in the Three Towns :-
On the point by Ardeer and at the Shell installation in Ardrossan.
Might be able to find something there.
JD.
Top

Thanks JD. The RA Museum Archivist was not able to tell me exactly which Regiment JM was with because there were several 213 batteries: some Light and some Heavy AA. It was not until 1947 this nomenclature changed: “due to confusion”. Your local A-A knowledge could help me identify the RA Regiment. I have yet to apply for JM's service record.